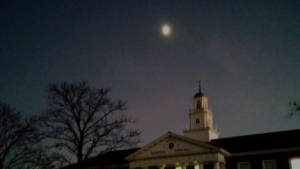 It’s rare that I have the house to myself for more than a few hours, and even rarer that I am home alone for the night. But one such occasion happened last Thursday; sometime around midnight, I checked the doors, turned out the lights, and went to bed. I read for a few minutes, said this prayer, and closed my eyes to sleep. It was later than my usual bedtime, and I slept a bit lighter – pretty typical for me on the first night I’m alone.

A week earlier, my eighty-something neighbor, Barbara, was found wandering the neighborhood in the middle of the night. When I visited her in the hospital the next day, she told me that she woke in the night and saw a man standing in her living room. She ran outside because he was a stranger and didn’t answer her when she spoke to him. She didn’t remember how she got to the hospital, and didn’t recognize me; she wondered why her husband, daughter, and aunt hadn’t visited. She didn’t remember that her husband and aunt had died years back, or that her daughter lived in South Carolina. All she knew was that she didn’t feel safe enough to stay in her home that night. It wasn’t the first time an imaginary stranger interrupted her sleep.

I’ve never prayed to be spared from frightening hallucinations, or to be saved from memory loss because I’ve never had to. I’ve rarely questioned my ability to distinguish reality from fantasy, and the handful of nightmares I’ve had that frightened me ended the minute I woke up. But when I awoke this past Friday, I said my first prayer of thanks for being spared such harm. I prayed that Barbara might be spared as well: imaginary strangers and the absence of long dead loved ones may not be real to the rest of us, but they were enough to send a good neighbor into a deserted street – and rob her of the truth that help was behind any of her neighbors’ doors.

5 thoughts on “…and protect me from all harm.”