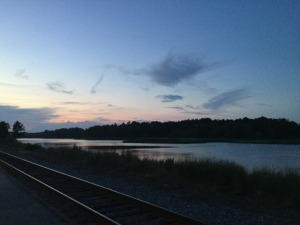 Unless I’m sick or the weather prevents it, I walk several times a week. My blood pressure and heart rate benefit from it, and it keeps me from gaining too much weight. Tidal bay waters are a quarter mile from my door, and the river is almost as close. Whichever direction I go, I can find these calm and rough waters, along with trees, birds, and squirrels in minutes. I can also find Tobey hospital, the library, and train tracks. It’s a pleasure to exercise by walking, so this is an easy resolution to keep. But is it possible to go home by another road? There isn’t really a way home that I haven’t already walked multiple times.

It’s an objective truth that I can never walk home the same way twice. The planet is in an different place, the weather changes, nearby houses are repaired or fall into ruin, and the neighbors I see today I may not see tomorrow. I no longer push a stroller or have a toddler holding my hand as I walk. Neighbors have come and gone, and the ones who remain grow older just as I do. Three of my relatives have died, two have been born, nine have graduated from high school, and two are now married. So much of my life’s reality has changed during these years that I’ve been walking from this door, from this home on this street in this town. I never return home the same way twice is my subjective truth because my home isn’t just the white house I live in – it’s the gracious, God-given life I live.

This year as I head out the door for my usual exercise, I’ll continue to enjoy what I see and hear. But I’ll keep in mind how the road that brings me home is different from the one I set out on. It’s not just my life story that’s lived out on these streets, it’s the holy life story of creation. I’m part of the great history of the universe, albeit a very small one. But even my small part, my dusty road, brings me to God-with-Us. So does yours.

Rest is the space between notes that gives shape to melody and harmony. Without it, a song becomes unrecognizable. When a musician in the orchestra misses a rest, the entire symphony is lost until the rest is recovered. Pushing through won’t help; only a pause in playing can restore the musician’s place in the symphony. Rests are required for two or more to play together.

I think the same is true for my life. Pushing headlong at breakneck speed doesn’t improve my performance and it puts me at odds with everyone else. I can’t add anything meaningful without the pauses, and I certainly can’t play well with others if I’m too busy playing my own part at my own hectic pace.

I don’t think the point of life is to get to the end as quickly as possible, or jamming in as many notes as possible. It’s not how beautiful music is made, and it certainly isn’t how a beautiful life is created. If I want to sing a new song to the Lord, I have to honor the quiet spaces between the notes. Solo or as a single voice in the choir of all God’s creatures, it’s the rest that makes my life a song rather than a noisy cacophony.

...ahead of them, went the star that they had seen at its rising, until it stopped over the place where the child was. When they saw that the star had stopped, they were overwhelmed with joy. On entering the house, they saw the child with Mary his mother; and they knelt down and paid him homage. Then, opening their treasure chests, they offered him gifts of gold, frankincense, and myrrh. And having been warned in a dream not to return to Herod, they left for their own country by another road. Luke 2: 9b-12

I usually don’t spend a lot of time thinking about money, but recently I’ve been gathering tax forms, bank balances, mortgage payments, and retirement information as part of my son’s college application process. For the first time, I am looking at the Magi’s story in terms of money.

There is very little information about these visitors in scripture, not even how many came or where they were from. Traditions vary the number (3-12, with 3 the most common today) and where they called home (Persia, India, Yemen?). Were they kings or Zoroastrian priests? Astrologers/astronomers? No one knows, exactly, and traditions contradict one another. But whatever their names, whatever their number, wherever their homeland, these magi spent a considerable fortune to find the infant king. So much treasure just to kneel in the dirt in front of Jesus and Mary. What did they get in return? Only overwhelming joy and a chance to find God-with-Us in a poor house in a strange land.

I’m sure their finances would never be what they might have been had they just stayed home. I’m sure some of their neighbors thought they squandered their fortunes for nothing. But home in the biggest sense is where we find God, or God finds us. How much is it worth to be at home with God in an unknown town in a foreign land? Every penny they spent and more. Given the chance, I hope I manage my money just as wisely.

This may not be the winter of my discontent, but it is the winter of my limited options for exercising. It’s also the season of bulky sweaters and filling meals. While I keep my weight within an acceptable range, January and February often find me at its top end rather than its middle or bottom. Eating slowly and mindfully will help, as will walking whenever the temperature is above single digits and the sidewalks passable. It’s nothing fancy or drastic, but it’s enough to fulfill a “watch my weight” resolution, in the usual sense of that word.

In the Epiphany sense, it’s my existential weight I need to watch. What I carry in my heart, mind, and soul that can cause damage. I can feast on anger or indulge in resentment until I get a soul or heart ache. Swallowing grief rather than letting it go will choke my spirit. So here is my plan:

I’ll do my best to keep my burdens to a minimum – grieving when I need to and letting go of hurts when it’s time.

I’ll see my work for what it is: a blessing, but not my life.

I won’t go it alone. There are so many wonderful companions on my life’s journey – family, friends, neighbors, strangers.

When it’s time to rest, I’ll rest – physically and spiritually.

I’ll trust that whatever weight I carry, if I offer it to God, God will take it. When God gives it back to me, it will be transformed into something that lightens my spirit.

On entering the house, they saw the child with Mary his mother; and they knelt down and paid him homage. Then, opening their treasure chests, they offered him gifts of gold, frankincense, and myrrh. And having been warned in a dream not to return to Herod, they left for their own country by another road. Luke 2:11-12

I’m not one for diets, and many of the ones promising quick weight loss are full ingredients I can’t eat, anyway. I enjoy cooking and have the time to make meals and snacks from scratch, so few prepackaged foods are in my cupboards. I read labels, support local farms, and do my best to buy meats and eggs raised humanely and organically. I do my best to avoid overeating. In the usual sense, I already watch what I eat.

But Epiphany is the season of going home by a different road – or watching what I eat as somehow related to my faith life. Food that sustains is more than proper sourcing and appropriate portioning. It’s a gift to have enough food, and a daily miracle when that food supports small farms that leave the earth enriched rather than depleted. It’s worth the higher price to know that the animals I consume didn’t live and die in dirty, cramped quarters. As my husband once said, isn’t the life of the turkey that provides my Christmas dinner worth much more than forty cents a pound?

This year, I’ll continue to do my usual shopping, cooking, and gardening. My family will say grace and waste as little food as possible. We will support Heifer International so others can do the same. But I’ll watch what I eat in a whole new way, too. I’ll eat slowly enough to savor my food and the company around the table. I’ll notice the colors and shapes on my plate. I’ll do my best to see the hand of God in each meal. I’ll watch what I eat because there’s grace in every bite.

My throat started getting a tickle New Year’s Eve, and by the time the ball dropped I could tell a cold was on its way. Unfortunately, it’s turned out to be a rather nasty virus, keeping me home with a fever, sore throat, and a cough. When it was clear that I wouldn’t be healthy by Sunday, I called my sister to break the news: my family and I wouldn’t make the holiday family get-together at her home in New Hampshire.

Last Sunday, my sister called me. She had a rather nasty virus and had to cancel the family get-together scheduled at her home that day. A lot of extra work comes with a rescheduled or missed event: calls to everyone involved, removing edible gifts that might spoil or get stale from baskets and bags, freezing already prepared entrees and desserts, and moving other things on the calendar to fit a new date in. Fourteen of us did that when my sister got sick. When I got sick, I planned on mailing the gifts I could, and taking a trip up to New Hampshire to bring the ones I couldn’t. The best I could hope for was to see a few of my relatives – work and school schedules resume for everyone tomorrow.

My sister called last night. After texting and calling everyone to let them know I was sick, they all decided to postpone. There won’t be a Christmas tree in the room when we have our Yankee swap, and we’ll call it a game night instead of a holiday celebration. Some presents will be swapped before the new event, and I’ll mail our family Christmas letter to everyone rather than hold onto it for another couple of weeks.

Why not cancel the whole thing and go into 2016 without a twice rescheduled event? At first glance, it looks like a lot of wasted time and effort. It’s probably the prudent thing to do, and certainly the most practical. But this year, we are going home by another road. On this road, saving time and seeking convenience miss the point: Time is where we seek the face of God and neighbor, self and family. That’s worth every detour and delay – and my family knows it.