Blessed are the peacemakers, for they will be called children of God.

As my friend, Bill Albritton, is fond of pointing out: it’s the peacemakers, not the peaceful who are called blessed and will be called the children of God. Not that the two are mutually exclusive – in the best of circumstances they reside together, giving a calm center to those who work for peace and spurring the ones living a serene inner life into public service and action. Peace isn’t the same thing as lack of contact with life in all its diversity. Hiding from my inner reality and shying away from the messiness of the world is a recipe for boredom and superficiality – not remotely the same thing as peace.

In the past few years, serving on a municipal board has brought its frustrations. The municipal leaders’ lack of a fruitful vision of and compassion for the people they were elected to serve has caused many a good person to throw hands in the air and walk away. Rude behavior at public meetings, refusal to recognize anything beyond personal likes or gain, and unwillingness to admit to mistakes and misjudgments are enough to make anyone angry, bitter, and exhausted physically and emotionally. No good deed goes unpunished runs through my mind at these times – not exactly biblical, but it sure feels like the truth some days.

Matching bad behavior with bad behavior won’t bring about change for the better – at least not in a permanent way. Hearts and minds are not expanded and opened by snide and demeaning comments. Sarcasm is a conversation killer, distressing to the one on the receiving end and revealing the user’s fear and mistrust of true conversation.  Even if verbal retaliation feels better in the immediate sense, it makes the encounter an act of war rather than peace. It will damage people on both sides. I’d rather have a conversation than a fight.

I don’t want to avoid life’s frustrations, and I don’t want to add to the conflict already alive and well in this world of mine. That means I have to seek peace as an internal state as well as work for peace in an all too flawed communal life. Perhaps this is the challenge of a lifetime. Perhaps it’s also a blessing… 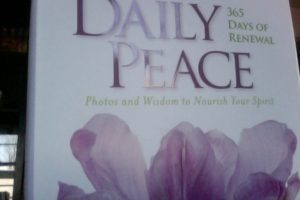