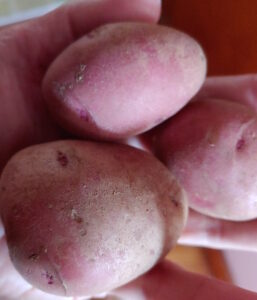 its pollen that braved the reefs.

in ivory suits, they fill our plates

and the delicious simplicity of the soil.

Last year, the potato harvest at the library’s learning garden was measured in pounds – all started from a handful of green tinted, stubby-root covered potatoes that were hiding in the back of my potato box. A couple of months after planting and a couple of days after pulling them from the soil, five middle schoolers scrubbed them clean. Thin sliced, soaked in salt water, lowered into golden oil, the learners turned those potatoes into chips. With a little guidance, work, and patience, garden-to-table went from an abstract idea to a direct and tasty experience. Long after they’ve grown up, they will remember the work it took to grow, harvest, and cook one of their favorite snacks. With Neruda, they may look at their plate of potatoes and know:

Then, dressed anew in ivory suits, they fill our plates with repeated abundance, and the delicious simplicity of the soil.

Maybe, when they say grace, they will be thankful for all the hands that prepared their plate full of food. And maybe, just maybe, it will be their own hands that turn soil and seed into food.

[For the past several years, I’ve been the learning gardener at my local library, leading a summer program for the very young, the middle schooler, and their parents and grandparents with the Marcia, the children’s librarian. Last year, Katarina joined in, bringing her considerable gardening and cooking talents – along with her deep fryer and a potato chip recipe. Although the pandemic cancelled this year’s program, I have faith that it will return in the years to come, and continue well beyond my own leadership.]