I read this off the bumper of an SUV a few days back. Living in New England, I’ve lived these words. Late December through March involves a lot of swerving around frost heaves and craters that could swallow a Vespa. On some of the back roads in town, potholes are a year round constant.

I don’t know where the driver with this bumper sticker lives, whether he or she chose these words or if they were a gift. But it struck me today that there’s a certain sadness to them if they extend beyond seasonal driving adventures. If I’m so busy avoiding the bumps and ditches on this road of life that I’m mistaken for a drunk, perhaps I’m spending too much time focused on the pavement (or lack thereof) and not enough time looking out the window at all life has to offer.

Lord, give me eyes to see your glory. Amen.

They are on bumper stickers and church message boards everywhere. But last night I saw them shining down from another place: Collision and Auto Repair of Carver. I pass the sign at least once a week. I am always thankful for the reminder, but until last night I hadn’t connected the business with an exhortation to pray.

I’ve seen good death and painful death working in a hospital. I’ve seen pain and suffering endured with and without grace. I’ve stopped at a few accidents to offer pastoral care. For doctors, nurses, EMT’s, chaplains it’s all part of the job. But it’s also part of the job for those who tow the cars away from the accident, and for those who repair them. Why this never occurred to me until last night, I cannot say.

To offer up a prayer, and ask that others do the same. From people who see the wreckage and work to repair it, this is no glib request. Life and death come to their doorstep every day. Lord bless them as they have blessed me with wise words and deep commitment. 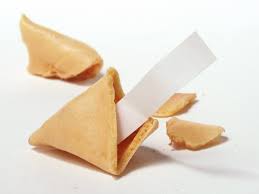 I am not naturally honest. I am so sometimes by chance.

I pulled this fortune out of its cookie a couple of years back. It’s been living in the ceramic bowl that holds my flash drives ever since. Sometimes it strikes me funny when I read it, other times it strikes a little too close to home. In either case, it’s true.

I’m not dishonest in the sense of lying or cheating; I do my best to act in good faith. But I doubt most people behind me in the grocery line have any clue who I am, and I don’t have any idea who they are. I don’t attempt to connect with everyone in a meaningful way. I’m not intentionally avoiding anyone, but an honest encounter takes courage, trust, and energy. It’s exhausting to swim beyond the socially acceptable shallow waters and head for the depths. If I saw every person for who he or she truly is, a sacred child of God, I doubt I’d get through the morning without tears of joy and compassion. If I allowed even strangers to see in my faulty life the hand of God, what might come of it? Such encounters don’t happen very often outside the small circle of family and friends.

But every once in a while, a random encounter as I open my post office box or return my grocery cart. A glance at the man with a red beard or a quick hello with the spiky haired girl stuns me with a glimpse of true holiness. By chance, I have eyes to see and ears to hear. I see my life and this world for what they are: sacred, blessed, and much more than enough.

It was on a sedan. I don’t think I would’ve noticed it, but the car was driving past the One Way sign posted on Sawyer Avenue – an One Way bumper sticker driving past a One Way traffic sign. What are the odds of that happening?

Sawyer hasn’t always been a one way street. When I moved to town fourteen years ago, cars went up and down this short, park-on-one-side-only connection between Main and High Streets. Residents could turn either way when they left their driveways until the possibility of future fender benders prompted the new directional limitation. There hadn’t actually been any accidents, but their potential was too persuasive to the local officials in charge of such things. For the last eight years, people who call it home can drive up their hilly street, but not down. For better or for worse, uniformity in direction rules.

The past few months I’ve had and heard many conversations about the state of churches, denominations, traditions, and faiths. There’s a shift in the religious world, at least in my Christian corner of it. Fearful voices demand going back to the good old days (read: double down on what is unique about a particular tradition and reject anything that moves in a different direction) or auctioning off any beliefs or practices that could be considered objectionable (read: dilute until there’s nothing even remotely different or possibly in disagreement with any other tradition or faith). Who knows what kind of collisions might occur if anyone takes their faith in a different direction or holds to an ancient, particular religious practice? Uniformity of direction, either enforced separation or the adoption of boring, shallow, anemic version of faith, is a One Way solution. Sure, it may head off future collisions of beliefs and practices. It may be easier to control how individuals and communities live out their faith. But it may very well take away a vital link from our faith homes to what’s going on in this great big world.

I’d rather risk the two way traffic, moving with care and consideration for those going in either direction. I’ll have to yield sometimes, letting others get where they are going ahead of me. Still, it’s a marvelous sight I’ll see while I wait: people coming from different directions, meeting and passing where my home meets the world.

It’s on the sign at the small house church in Carver, and I see it when I drive on 58.

I agree. Reading the Bible keeps me honest about who I am, what’s in my heart, and how I live my life in the embrace of God and neighbor. Scripture is a door that the Spirit draws me through, out of my small and self-centered world into the presence of the God who loves and values every creature including me. Scripture is an invitation to pray with all those who offered their lives to God in every time and place, and a reminder that others will receive the same invitation long after my passing from this blessed life. The Bible is a glimpse of the Son of God walking down a dusty road, a chance to touch the hem of his robe, and a place to sit at his feet.

I disagree. False living and believing isn’t a cavity that Biblical enamel prevents. I can quote scripture like the devil, supporting my cause and inflicting pain on the world. Truth isn’t a fact that can be memorized. Scripture isn’t a sword I brandish when I feel threatened by opinions that challenge my own. I can read the Bible to convince myself that my truth is THE TRUTH. If I’m a bit more sophisticated, I can read the Bible to justify my particular interpretation of scripture and discredit the interpretation of another.

If I had the letters, I’d stop add six more words to the billboard: 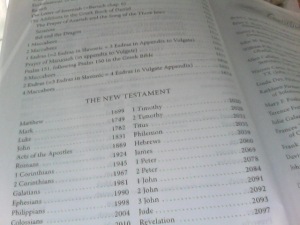 It was on the Jeep in front of me, read at a red light on Cranberry Highway. White letters on a blue background, on the bottom of the back door. When I saw it, I was thinking about the calls and emails I had to make today – trustee matters, first steps in a new library/school project, reminders for tomorrow’s meeting.

Earlier in the drive, it was thoughts of tomorrow’s Bible study: Hannah’s story. Before that, writing the mental list of things that need to be done in the learning garden before a service day brings a dozen or more high school learners into it.

I don’t think any of these tasks eat away at my life. I am happy with the time I spend on and at work. It adds something to my life, and it’s a way to serve God and neighbor. But I don’t have a forty hour a week job, or a fifty or sixty hour a week job. Or two jobs to keep a roof overhead. I have the time and energy to work for what I value rather than what pays bills. It has the disadvantage of no money, but the great blessing of time well spent.

If I were to put this bumper sticker on my car, I’d have to change it:

I Had A Job, But My Life Ate It