Ode to some yellow flowers

Rolling its blues against another blue,

the sea, and against the sky

October is on its way.

the sea may well be important, with its unfolding

myths, its purpose and its risings,

when the gold of a single

They flee the wide sea and its heavings.

We are dust and to dust return.

In the end we’re

neither air, nor fire, nor water,

neither more nor less, just dirt,

Neither more nor less than dirt – an Ash Wednesday sentiment. It’s true, too, in its own way. We are no more nor are we any less than ashes and dirt. Except we are also God’s beloved. Neruda never states that, at least not explicitly. Still, there are the yellow flowers. Perhaps, just perhaps, they are a glimpse of divine love. 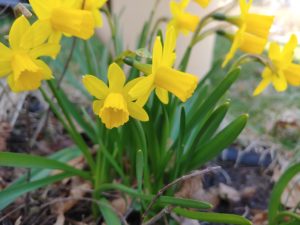