I’ve been in a few situations where I couldn’t get a word in, edgewise or straight on. When it happens, the same choice arises: make the effort to turn a monologue into a conversation or move on to a less forbidding dialogue partner. Whether to stay or go depends on the kind of monologue it is: one that only wants a passive and silent audience, or one that is sincerely seeking a conversation partner, but is having trouble making a connection. The first is a waste of time, the second is worth the effort to get that word in edgewise.

Sometimes, it isn’t a spoken word. Inked words on a page can be almost as one sided, especially when they are difficult to understand. Sometimes, the argument is too dense, an impenetrable hedge with no gate in sight. Sections of Stephen Hawking’s A Brief History of Time were like that for me – I understood all the words in the sentences, but couldn’t figure out what they meant strung together. It took me well over a month to get through the book, and a good couple of years before I understood it well enough to ask even the most basic questions about the ideas it contained. Why did I stick with this conversation when lack of understanding made it impossible to get a word in edgewise? I suspected there was something true and deep in Hawking’s printed monologue – something worth the attempt to change it into a conversation. Twenty years later, I felt the same about Sean Carroll’s The Particle at the End of the Universe.

I wonder how many people experience holy scripture of any kind – Christian, Muslim, Jewish, Hindu, Buddhist, etc. –  as such a torrent of words that no one can get a word in edgewise. Holy writ is meant to be a conversation: it’s the best attempt of people throughout history to offer those who come after them an entry, constructed of words and prayer, into God’s infinite, intimate, loving reality. So get your word in, straight on or edgewise. It’s the conversation of a lifetime, and God eagerly listens for the word we offer. 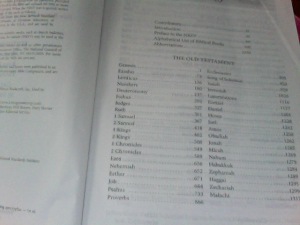 I am a Christian educator and writer.I have worked in churches, denominational offices, and seminaries. I have a PhD in Theology from Princeton Theological Seminary, with a focus on Practical Theology and educating in faith. In 2010, my book, "How the Other Half Lives: the challenges facing clergy spouses and partners," was published by Pilgrim Press. I believe that words can build doorways that lead to encounters with God through the Spirit. View all posts by Johnna