Will you faithfully execute the duties of your office to the best of your abilities and in accordance with the laws of this municipality, the state of Massachusetts, and the laws of the land?

I’ve said yes three times now. It’s the swearing in part of joining a municipal board – in my case, the Library Board of Trustees. Everyone who takes a public office makes the same promise, even if the words vary from place to place. At reappointment or reelection, these words are said again, and the promise to serve with honesty and integrity renewed.

Some people think it’s a little silly to stand at the town clerk’s counter, right hand raised, and make a vow of service. What could possibly tempt unethical behavior or criminal activity in a three year stint on a public library board? There’s no way to take over the world from such a place, and there’s no one offering big bucks for voting a particular way on library policy. I’m not one of those people.

I know the power of words and I respect the power of promises made. Saying something out loud in front of witnesses has an effect. Will it stop someone bent on personal gain at any cost? Probably not. But it will help the average well-meaning citizen let go of personal opinions and preferred activities if better ways are offered. It’s an ego check – a promise to uphold the good of the many over getting one’s own way.

Vows like this one are plumb lines, keeping the foundations of town departments solid and strong. Imagine what the world would be like if everyone who swore the oath kept the oath…

Lord, help me keep the promises I’ve made. Guide me in my actions, that good many come of them. Amen. 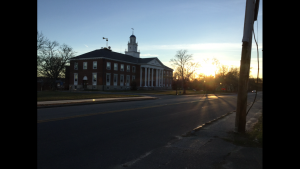