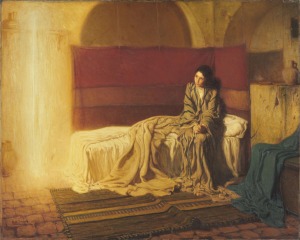 Like Mary, Elizabeth in Luke 1: 5-17 was confronted with a big surprise when she discovered at her advanced age that she was to bear a child, John the Baptist, as was Abraham’s wife Sarah who was even older when she became pregnant. So our God not only is full of surprises but apparently has a marvelous sense of humor. I tried to picture these three women in my mind and imagination receiving such news: Sarah as amused, Elizabeth as shocked and Mary as bewildered at her young age. But then, as we know, all things are possible with God – even the impossible. Wouldn’t all these women be asking themselves: “Why me?” “Why now?”

Since I couldn’t find a picture of a surprised Sarah or Elizabeth for you to study and meditate on, I am providing a copy of a painting of Mary having just received the news of her becoming the mother of God as depicted by H. O. Tanner in a painting which hangs in the Philadelphia Museum of Art. Put yourself in this scene if you can. Try to imagine what she and her older cousin might be feeling. How would you feel? Who would you tell? What would you say?

What a surprise to discover that God surprises you when you least expect it; when you expect the opposite or expect nothing at all. Just when you feel that you are unworthy, lacking, “barren” with nothing much to give, indeed, you shall give because the God of surprises always wills it for you and from you. Elizabeth will bear John who will announce Jesus to the world. Mary will bear Jesus who will announce God’s love for the universe and each of these babies will be born to women who were blessed with God’s wonderful gift of surprise. How has God surprised you?

One thought on “Surprise”