Tuesday found me in the library’s learning garden with sixteen Tabor Academy learners and their three advisors. It was Tabor’s Fall service day and they’d come to get the beds ready for cold weather – weeding, transplanting a few perennials, picking peppers and herbs, gathering seeds for next year. This was the third time a group from Tabor had come to help, but the first time for these students. They replaced last year’s twice visiting group whose members had all graduated into the world beyond Tabor and this project.
The sixteen new students learned about the garden and reconfigured some of its beds; they tried hot peppers, nasturtium flowers, and pumpkin blossoms. They tasted the herbs – sage, oregano, basil, chives, and mint. When the work was done, they made and enjoyed herbed dipping oils. Somewhere in the process, they went from being students on a service site to gardeners, claiming the space and the work for themselves. 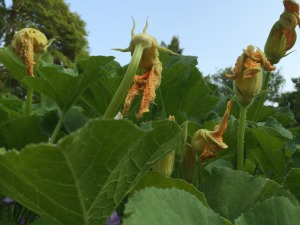 When they got back on the bus with a wave and a “see you in the Spring,” I returned the wave and the “see you then” and sent them off with my thanks. Just as I had the year before with many others. As the bus drove away, I sent a silent blessing and heartfelt thanks to those I doubt I’ll ever see again, but whose hands and hearts added so much to the learning garden. And I remembered a holy and wondrous truth: anybody’s work can be done by another, but nobody can ever be replaced.

For more on this series, see “Place” above…