Years back, someone dear to me lost the path of peace and joy, and ended up in the spiritual wilderness of physical exhaustion and emotional darkness. Hurtful things were said and done, and our friendship was damaged. Eventually, after many years, the friendship was repaired and trust came back. But it wasn’t something that came quickly or easily for either of us. It took a lot of work to restore what had been such an easily formed friendship so many years ago.

What kept me in the friendship when it would have been easier to let it go? The certainty that my friend was a good person going through a bad time, not a fundamentally bad person.

Desmond Tutu and the Dalai Lama both practice forgiveness – releasing self and other from continued harm and hatred. They do not advocate forgetting: actions have consequences, and avoiding or denying them gets us nowhere but in more trouble. I doubt either one would have inspired so many people to live in love and peace had they not learned to forgive, remember, and move forward.

It takes a lot of strength to forgive, but it opens us up to joy again. Isn’t such a life worth the effort? If the Dalai Lama and Desmond Tutu are able to forgive the many destructive things that have happened in their lives, I’m willing to try to forgive the few in mine. What have I got to lose but suffering? 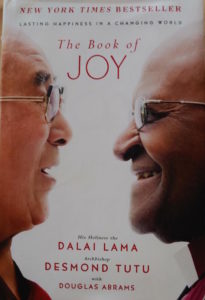