So is my word that goes forth from my mouth;* it will not return to me empty;

But it will accomplish that which I have purposed,* and prosper in that for which I sent it.

It is Good Friday today, called “good” in the tradition of describing all things powerful and potentially deadly as positive. The act of crucifixion, the death of God on a cross, was not required by God; the idea that God’s anger or holiness required the blood of an innocent man to pay the price for the evil of others feels more like a way of avoiding the truth: humanity put Jesus on the cross.

From God’s side, crucifixion wasn’t a requirement. But God works with this broken world and its fearful people, bringing holiness and forgiveness out of even the worst acts. Since humans chose the cross as a response to God With Us, God hallowed even that.

Good Friday is good because God accomplished what was intended in incarnation. As it was, so it is, and always shall be. Even when the means could have been other that what humanity chose. 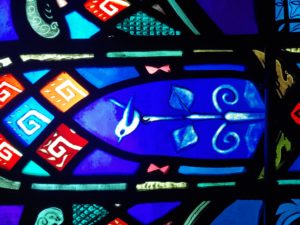