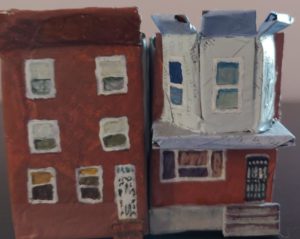 In those days John the Baptist appeared in the wilderness of Judea, proclaiming, “Repent, for the kingdom of heaven has come near.” This is the one of whom the prophet Isaiah spoke when he said, “The voice of one crying out in the wilderness: ‘Prepare the way of the Lord, make his paths straight.’

Now John wore clothing of camel’s hair with a leather belt around his waist, and his food was locusts and wild honey. Then the people of Jerusalem and all Judea were going out to him, and all the region along the Jordan, and they were baptized by him in the river Jordan, confessing their sins. [Matthew 3:1-6, NRSV]

What do Princess Margaret and Queen Elizabeth II have to do with John the Baptist? A lot, but only perhaps if you’re watching “The Crown,” season 3.

In one of the earliest conflicts of the new season, we flash back to the abdication of King Edward VIII, upsetting the established line of succession and throwing the monarchy into a royal tizzy. Elizabeth’s father ascends the throne as George VI which makes ten year-old Elizabeth the heir apparent. She goes from third in line (long shot) to heir presumptive. It would seem a thrilling destiny for a child, except little Elizabeth doesn’t want it. She shies from a lifetime role of service from which there is no escape, no term limit. To the rescue rides her little sister. The idea of being queen sends Margaret into rapture. She is outgoing, voluble, personable. At six years old she can already see her image on every coin and pound note in the realm!

When the little queen manqué boldly approaches the King’s private secretary and proposes the sisterly switch, she is met with a withering reproach. The nation’s sovereign, he thunders, is not chosen on the basis of personality and charm, good looks, quick wits and a winning way with people. It falls to the one chosen, ready or not.

Jesus’ cousin John is a messianic Margaret. He is a bold innovator—taking an obscure Jewish water rite for gentile converts and fashioning a dramatic, public, in-the-river baptism for all Israel. He is a fiery orator, a shock prophet who rails against the power elite.  He even dresses the part, wearing a camel hair get-up that marks him as an extreme ascetic. Disciples flock to him. Matthew tells us that “Jerusalem and all Judea and all the region of the Jordan” (3:5) went out to hear him preach and be drawn spellbound into the river. He was a monster celebrity.

In short, John was a messianic kind of guy. Plenty of people hailed him as such, so much so that John had to forcefully deny it (John 1:19-29). His role in the story of Jesus is to command the stage so forcefully that he seems to be The One. His character is the backdrop, the foil against which Jesus appears—by comparison—small, weak, ineffective. The let-down is critical: God knows we will always go for the John, the Margaret. Against that attractive figure we are forced to see in Jesus a new, puzzling kind of power and authority, one who would not break a bruised reed or snuff out a smoldering wick (Isaiah 42). Milk-toast, anyone? John saw it and seriously wondered if this was the one whose coming he predicted. “I baptize you with water,” he had shouted, “but he—he will baptize you with fire!” How could John have known that flame the messiah would bring would be the fire of love?

The power of Advent lies in this John-Jesus tension. Slowly, in advance of the Nativity, we must have our minds re-wired, our expectations reversed. Every year we must confront our persistent Margaret mentality, our hunger for a “powerful” leader: if the world is going to be put to rights we need someone with some flair and fire, someone people will listen to, someone who’s not afraid to knock a few heads together and punish the offenders. That self-confrontation, which usually happens in quiet reflection, is all the opening Christ really needs. Then he appears in all his messianic beauty, his only glory the light of his welcoming countenance, his only power the force of his love.

One thought on “The Modest Messiah”