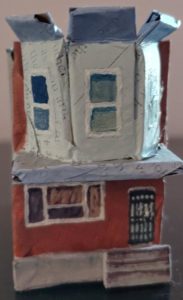 11 Now faith is the assurance of things hoped for, the conviction of things not seen. Indeed, by faith our ancestors received approval. By faith we understand that the worlds were prepared by the word of God, so that what is seen was made from things that are not visible. By faith Abel offered to God a more acceptable sacrifice than Cain’s. Through this he received approval as righteous, God himself giving approval to his gifts; he died, but through his faith he still speaks. By faith Enoch was taken so that he did not experience death; and “he was not found, because God had taken him.” For it was attested before he was taken away that “he had pleased God.” And without faith it is impossible to please God, for whoever would approach him must believe that he exists and that he rewards those who seek him. By faith Noah, warned by God about events as yet unseen, respected the warning and built an ark to save his household; by this he condemned the world and became an heir to the righteousness that is in accordance with faith. Hebrews 11:1-7

Faith. It’s a strange word, really. More often than not it gets tossed around without much thought being given to its meaning. On any given day we might be urged to have faith in some product that will make us look younger, faith that our dreams will be realized or even faith that the nerdy techie will work wonders on our virus-ridden computer so that it will begin to function properly again. Even talking about faith in God is open to all sorts of possibilities. What does it really mean to have faith in God? Is it belief in a particular doctrine? Is it confidence that if you live the right kind of life you will go to heaven when you die? What is it about God that we are to have faith in?

One of my all-time favorite songs asks if we have faith in God above, implying that the Bible tells us so. It goes on, claiming that the Father, Son and Holy Ghost all caught the last train for the coast. Even though I like this song, I’m not big on its theology. A “God above” is to me a distant and aloof God. A God that would catch any train to get out of town is in my way of thinking a God that is willing to abandon us. And yet, there are times God does seem distant and aloof; there are times we feel abandoned by God.

Advent offers a different perspective and one I believe is a genuine source of faith. It’s not about distance and abandonment; it’s about presence and incarnation. It’s about a God who is here with us, at work in us and among us. A God whose one great desire is to redeem not just us, but all creation—to make it all good as it is intended to be. It’s about a God who is doing all that right now and every day of our lives, even when we feel God is distant and we have been abandoned. Advent is about incarnation. Incarnation is about an ever-present God, who actually became one of us. And this passage reminds us that all we need to be about is seeking this God—not finding, not obeying, not believing, not even feeling good about our relationship with this God, just seeking.

I pray this Advent will be a time of seeking for me and for you.