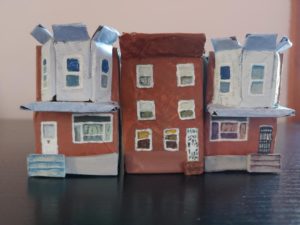 When Jesus entered Peter’s house, he saw his mother-in-law lying in bed with a fever; he touched her hand, and the fever left her, and she got up and began to serve him. That evening they brought to him many who were possessed with demons; and he cast out the spirits with a word, and cured all who were sick. This was to fulfill what had been spoken through the prophet Isaiah, “He took our infirmities and bore our diseases.”… When he came to the other side, to the country of the Gadarenes, two demoniacs coming out of the tombs met him. They were so fierce that no one could pass that way. Suddenly they shouted, “What have you to do with us, Son of God? Have you come here to torture us before the time?” Now a large herd of swine was feeding at some distance from them. The demons begged him, “If you cast us out, send us into the herd of swine.” And he said to them, “Go!” So they came out and entered the swine; and suddenly, the whole herd rushed down the steep bank into the sea and perished in the water. The swineherds ran off, and on going into the town, they told the whole story about what had happened to the demoniacs. Then the whole town came out to meet Jesus; and when they saw him, they begged him to leave their neighborhood. [Matthew 8:14-17, 28-34, NRSV]

A place for everything, and everything in its place. Great advice for keeping track of off season clothes, Christmas decorations, and that apple slicer/peeler/corer used once a year for making applesauce. When things have a designated place, it’s much easier to find and use them. It makes life easier. Even if the organizing isn’t perfect, we resist changing it (even if the change is for the better), because changing the world we inhabit is uncomfortable. It isn’t such a big deal when we are dealing with material things: it’s a monumental deal when we are talking about people.

The Gadarenes were used to the two demoniacs blocking passage in a certain part of town; it might have been inconvenient, but everyone adjusted accordingly. Then Jesus throws everything out of whack by healing them – not something the townspeople expected or requested. The way is no longer blocked, but it cost everyone their comfortable routine. Everyone must face these questions: what happens now that the demoniacs aren’t taking up their usual place? What changes have to be made to help them find their new place in the community? This caused so much anxiety among the townspeople that they asked Jesus to leave rather than risk more changes to their predictable communal lives. In the end, they’d rather a few of their own live with demonic possession than disturb the comfortable routine of their communal life – a place for everyone, and everyone in their place, even if it’s killing them.

Jesus dwelling among us means things will change. We won’t be able to treat people like objects, consigning them to a particular place forever because it’s easier than accommodating the blessing of their release from the demons that tortured them. And we won’t be able to lie to ourselves, convincing ourselves that nothing can bring healing to our lives. When Jesus comes into our neighborhood, all kinds of things will change.

The big question: will we ask him to stay or show him the door?